skip to main | skip to sidebar

Wow if someone would have told me how hard being a Mom of 3 was I probably would have never believed them. Why is it that being a Mom 24/7 makes you feel like you are failing every day?

I have No time..I mean NO time. I am always behind on Laundry,Housework,Summer Reading sight words with my 6 year old,everything.

Everyone tells me that I need to go out and do something for myself, and I did go see a play with one of my dear friends .. We stayed out pretty late and ya know what I am still recovering from being out. I am more sleep deprived,I am behind on laundry and the grocery shopping day was off. I am Constantly trying to catch up,it was fun going out ,but was it worth it? All the stress when I get back home?

My life is not about me or my needs ..It does not matter if I enjoy what I am eating for Dinner or weather or not I even sit down for a meal. I am just barely making it every day . It does not matter what I want to do,it's what needs to be done and what my children Need. I go take my children to places that they will have fun at (Kids Museum,Zoo,) even if it means total chaos. Life right not is not about me enjoying a leisurely walk through the Zoo looking at the animals and reading their stats..Its making it through the Zoo ..making sure everyone one eats and stays hydrated then loading up all the gear and un -loading.

do NOT get me wrong I would not change having 3 Kids for the world...just tell me when will this get easier? Thank You for reading my vent and keep me in your prayers ,because I am barely treading water right now!

Happy 9 Month's to my Princess Rowan 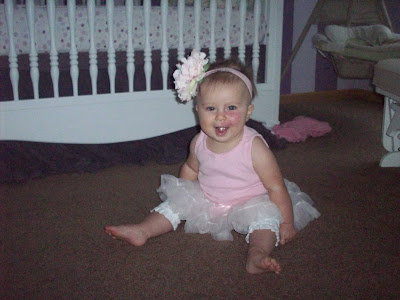 Princess Ro Ro it is so hard for me to believe that you are 9 months old already. It really goes by so fast. You are my last Baby..I am treasuring every little thing.

I ordered you a wall sticker for above your closet Door. It says that: 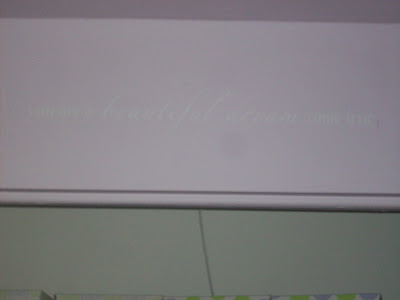 "you are a beautiful dream come true"


I always dreamed of having a Little Girl. I knew in my heart that God would bless me with a Daughter. 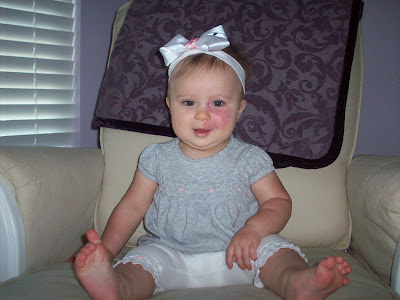 You are a little Angel and you are trying to crawl and Rolling all over the place.

You blow Raspberries and Clap your hands when prompted


You love to eat and sit in your High chair

Your Brothers Love to make you Laugh

Your laugh is so contagious

You have a raspy little voice...everyone cannot wait to see what this will sound like when you start really talking.

You are Loved so very much.. 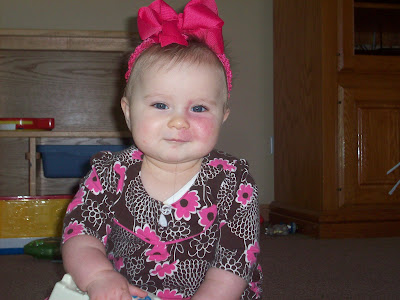 As you grow up Princess..... I will tell you about all the Angels that kissed you upon your face and gave you your Birthmark. Remember Rowan I Love you so very much.......You are my Beautiful Dream Come True! 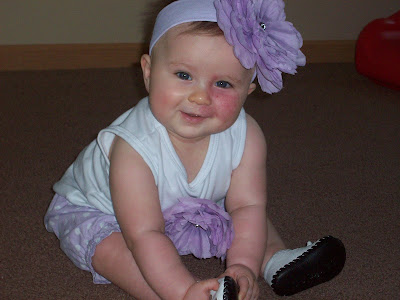 Where have I been? What's been going on? 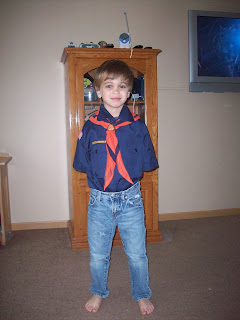 Well once again I have been ignoring my Blog and tending to my family. I know I am doing the right thing and putting my time where it need to be,but part of me would Love to have time to blog. 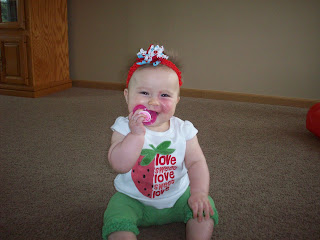 Princess has only had 1 treatment on her port wine Stain and we plan to do another one sometime after the 4th of July. She has taken forever to heal completely. She is getting so big ..She will be 8 Months on June 13... Where does the Time go? She is Rolling all over the place. I wonder if She will ever crawl,or just go strait to walking? 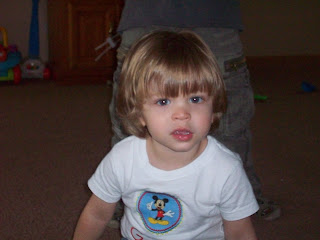 Lil Worm is in his terrific 2's....He is still climbing on everything and this kid has no fear..He can Climb up on to the top of his Brothers Bunk bed with out a ladder...He's a Little Spider man...Keeps this Mama so busy.


Wile I have been away from my Blog we all had a virus and then we went to Disney World..(Go Ahead call me crazy taking a 6 year old a 25 month old and a 6 Month old to Disney) It was crazy. We had fun,but that was soon interrupted when Little Worm had a Febrile Seizure and ended up in the emergency room in Florida. That was the scariest thing that has ever Happened to one of my Children and Me. I will blog about that later (hopefully) Then we got home and all recovered from the vacation and wouldn't ya know it we all got sick again. Little Worm had Croup..That's not fun either. Monkey boy just got a cold and Princess is still on antibiotic for a Double Ear infection. I pray that we will be done with the Sickies for this Summer.

So anyway I do not know how all you Mamas do it? Raise a Family and still have time to blog..Wish I could get better at keeping my blog, Most Days I do not even sit down to eat Breakfast or Lunch..It is so busy around here,and by the time everyone is asleep my Mommy Brain no Longer works to think to write:(

I Hate The Virus! 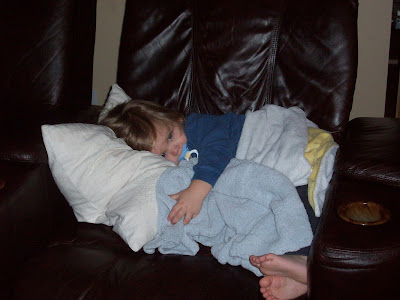 Why is it always the Middle of the night for the 102.6 Temp? My Poor Lil Worm is sick with some sort of Virus that has to run it's coarse. That's What the pediatrician Said. Of coarse I would like it if my Children never got sick,but why is it almost always a Virus. You may not agree with me,but I would much rather take some sort of Antibiotic and see my child on the road to recovery in 2 days than..... Nothing with days of prolonged vomiting and fevers.
Anyway Hope He is over this Quickly and that No-one else in the Family gets it!
Posted by Carly at 5:24 AM 3 comments:

And A Little Boy Turned 2 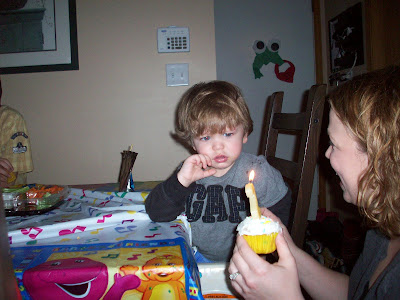 It's Hard to Believe that my 2ND son turned 2 Feb 28Th. Of coarse I am late with His Birthday Post. I just cannot seam to find any time to Blog.

Anyway Little Worm Had a Great Birthday Party . It was very small and just Family and......It was Perfect.

Some Little Things that I Always want to Remember about you at 2 Are:

The way you Hug and pat people on their back:)

The way you Drag around your Blue Blanket and rub it on your Lips when you are Sleepy:)

The way you Dance and Jump when we watch Raffi:)

The way your eyes light up when Brother gets home from School:)

The way you try to share with your Baby Sister and tickle her Feet:)

The way you sit on my Lap and Listen to your Favorite Books at Bed Time
Peekaboo Animals,and The I Love You Bear Book:)

The way you say BUZZZ and WOOOODY...Toy Story is your Favorite right now:)

The way you Love going Bye Bye,but hate being in your Stroller:)

Mommy Loves you so very Much Little Worm you are turning into the cutest Little Boy and I am so Happy that your my Son:) 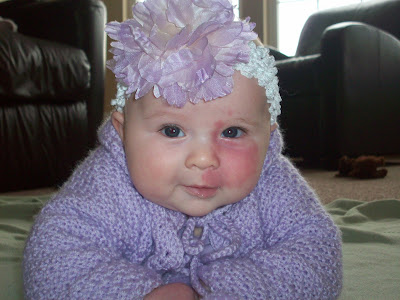 With Princess's type of Birthmark (Port wine Stain) there is a chance that one could have Sturge Weber Syndrome.

Well This past Tuesday was her apt downtown at a Children's Hospital for a MRI. She could not have any Breast Milk past 3:00 am. So I set my alarm clock and woke her up to feed her at 2:45.

My Husband was the one to take her to her apt. We had no one to watch the other 2 Boys and since we Both could not be there. He was the Man for the job. I am so not good in these situations. He is much better.

My Husband and my Daughter left the house at 5:45 am to get to the Hospital by their 7 am apt. I was texting my Husband the entire time.

At 9:00 am He texted me the "He could use a beer" of coarse he did not have one just just how stressed it was for the Hospital to give her the Anesthesia . I guess it took many tried for them to get a good vein.

When everything was said and done my Husband had to give her a Bottle before they could leave..(good thing she takes the bottle like a champ)

When She came home the Hospital said that She would Probably sleep for about 5 hours strait.
She Pretty much did. I just Held her as Much as I could and was so Happy that She was Home and that in a few short Days we would have closure on weather or not She had Sturge Weber Syndrome.

Wednesday came and went and we still had not herd the Results, so on Thursday Morning I called the Neurologist Nurse and left Her a message basically saying that If it was your Daughter you would want to know as soon as possible. Wouldn't ya know they called us back with in 20 Min and told us the GREAT news that She does Not have her Birthmark on her Brain!

I am eternally Grateful for this answered Prayer and Now we can begin laser treatments to diminish Princess RoRo's Birthmark...Her 1st Laser surgery is scheduled for March 11 and Both my Husband and I will be there with Her!

Carly
Married to wonderful Husband,have 2 boys Monkey Boy is 6 and Lil Worm is 2.5 years old,and I now have Princess Who is 9 Months old!

Visits from my friends